It is with deep sorrow that I announce the passing of a truly great personality and personal friend, Gracie the cat.

Last night, at about midnight, there came a knock on my door. It was my neighbor Casey, and she was obviously in distress. Apparently Gracie had been found in a neighbor’s yard after having been missing for several days, and she was not looking good. Casey said she did not think Gracie would last the night and asked if I would come and see her. In my official capacity as an animal energy healer I would have done this anyway, but as Gracie and I had shared special moments as friends I immediately replied that I would be there.

While I gathered my mesa and other healing tools together I reflected on our friendship. Gracie had the most open and trusting heart of anyone I had ever met. Everyone, friend or stranger, was greeted with joy by Gracie. Apparently she had never met someone she did not want to know, and in conversation with the neighbors I discovered that she literally knew more people on the block than any of us did (see Gracie the Cat Star). She would run down the sidewalk or cross the street to greet you, meowing in welcome, and when she reached you there would be purring and great affectionate gestures. If you were really open to her, and willing to crouch down a bit to her level, she would make her way into your lap, eventually placing herself across your shoulder, rumbling purr vibrating in your ear. A little kneading to soften you up further, and when you were putty in her capable feline paws, she would drape herself, like a boa, around your neck.

When she was in need of healing she would instigate a variation on this theme (see Gracie the Cat and Fireworks); she would lie in wait outside my house, and when she had my attention she would curl herself up in my arms, tuck her head under my chin, and get as close to my heart chakra as possible. At those times I could feel how open she was; Gracie was 8 lbs. of unconditional love, and my feelings of affection for her would just well up.

As I recalled her energy, her sunny disposition, and the many memories I had of her including my recent pajama-clad photo shoot of Gracie (see Gracie by Morning Light) I felt fear that she might be lost to us. What would we all do without her?

As I entered Casey’s house to see if there was anything I could do to help Gracie I made a deliberate effort to put those fears and memories aside so that I could best be a hollow bone for the healing energy that she would need. At my first sight of her my heart sank into my feet, she could barely raise her head, and she seemed very out of touch with her surroundings. As I knelt by the chair I acknowledged that we might lose her and put that feeling aside.

And then it happened—Gracie broke through my hard-won professional balance. She heard my voice; the voice of the person who had always helped her when she had been sick in the past, and although she was very weak, she began to crawl toward my heart chakra which was level with her on the chair. As I leaned forward to meet her Gracie shoved her face into my chest and wrapped her right paw around my bare arm, claws digging into my skin and leaving marks, and she hung on for dear life like someone drowning, I could feel the tension and the fear in her and there was no purring this time. At her demonstration of complete trust in me I felt my heart break into little pieces, and I had to put that aside, too. Gracie needed me.

As I began to assess her energetically I could feel some strange kind of disturbance in her upper energy field, something like disconnected signals. I dimly registered that information and continued looking for what might be causing the problem. She did not appear to have any external injuries, there was some evidence of what was probably arthritis (Gracie was 13), but nothing jumped out at me for what could cause these symptoms, and it became clear to me that Gracie was not going to be able to tell me, Whatever was going on was causing her ability to communicate to break down.

At this point I needed to open my mesa and turn the session over to the universe. When in doubt my philosophy has always been to get out of the way and let the energy and the client dialogue. It is then that miracles can occur.

It became very clear to me that I could not disengage Gracie to open my mesa in order to open sacred space, thereby create a place for healing between the worlds (consensual reality and the spirit world; this is the realm of the shaman). Gracie made it very clear that physical contact was emotionally important to her, and she wanted to be able to draw on the Reiki energy freely. I had to ask Casey to open my mesa and to distribute the stones in a circle around Gracie and I. It is a tribute to my mesa that it allowed this, as the general rule is that no one handles the mesa except the shaman.

As Casey distributed the stones, and the rest of her family watched quietly, the energy began to build. Search as I might I could not see a thread of possibility that led to Gracie surviving this, but neither could I find certainty that she would not. I set my intention for her highest healing good, allowing the shamanic energy to enfold both of us, opening my feelings, feeding the energy with my love for her, and at the same time attempting to put aside my fear of loss.

I performed a Reiki attunement for her, re-connecting her fully to Source for her highest mental, emotional, physical and spiritual well-being, and I could gradually feel the tension in her body ease, her fear subside. She entered a trance-like stage of healing where I sensed her soul journeying through the universe. Her breathing slowed, and I wondered if possibly she might choose to use the energy to leave her body permanently. As I had no idea of the outcome I clearly set intent for her to receive whatever she needed. I built a Bridge of Light for her so that whenever it was her time to leave she might do so in as joyful and a painless a fashion as possible, and then be met and guided to wherever she was to go next.

When we finished Gracie was calm, but still clearly not right. Realizing that we had done all that was possible, it was now time to get her to a vet.

As Gracie drove off with her family my heart was heavy with the sense that I might never see her in body again. When I re-entered my house my animals clearly picked up on how I was feeling and decided that it was time to lighten me up. So, at 1:00 a.m. we had a silly play session, re-affirming our connection to one another and joy in life. When I finally crashed for the night all the cats snuggled up with me, blanketing me in care and concern.

I woke up once during the night with the sense that something had happened, but it was not until after noontime that I learned that Gracie had passed. All tests at the Burien emergency clinic showed no elevated levels of anything, however her behaviors indicated neurological compromise, and the conclusion was that Gracie had a brain tumor. With great difficulty her family made the decision to humanely euthanize her.

When Casey called me the next day I heard in her voice that my worst fear was confirmed—Gracie was gone. A part of me was glad that she would not continue to suffer as she clearly had been; another part keened in grief at the thought that she would never wrap her paws around me again. It was as though for me a light had gone out in the world.

Casey shared with me some of Gracie’s early life. Apparently Casey and her then-husband had been looking to adopt from the shelter. Casey said she did not see Gracie because she is short, and Gracie was in a top cage, but her tall husband saw this paw reaching out at them, and suggested they check out the eager cat.

In the petting room Gracie leapt from one lap to the next in a frenzy of affection. She had been found behind a building with her kittens and was about one year-old. The kittens were weaned and Gracie needed some more beings to love. Casey and her husband complied and adopted her.

So, how did an unwanted stray with no place to raise a family maintain an unlimited amount of trust in the goodness of the universe and the kindness of mankind? I have no idea, I only know that Gracie is my hero. As the neighbors and I carried the news of her passing from one house to the next, and stories were shared, I realized that Gracie, a small gray and white tabby of unknown origins, had woven a thread of friendly connection through a block of disconnected people simply through the power of her unconditional love. One little cat created a village.

Good-night, Gracie, may your legacy of love live on.

In memory of Gracie I invite you to post your comments and share your memories of Gracie here, or perhaps you have stories of other animals who have inspired or blessed your life like Gracie blessed ours.

Postscript: A Peruvian death despacho ceremony was held at Wild Reiki and Shamanic Healing LLC for all friends of Gracie. It was a beautiful celebration of her life, and all 14 participants shared in the ceremony, adding their prayers and memories.

Rose De Dan, Wild Reiki and Shamanic Healing LLC, is a mesa carrier in the Peruvian Q’ero tradition. In addition she is also a Reiki Master Teacher, animal communicator, author of the acclaimed book Tails of a Healer: Animals, Reiki and Shamanism, and creator of Animal and Reiki Art. As an animal shaman, she views her role as a healer as one of building bridges between people and animals, and of empowering them to reconnect with Pachamama, Mother Earth.

In July, following shamanic guidance that reminded me to focus on building bridges between people…

World Animal Day and A Walk on the Wild Side

Death of Cecil the Lion and the Path to Healing

The path to healing is not an easy one—shamanic insights on the killing of Cecil the lion from animal communicator and healer Rose De Dan.
This Post Has 0 Comments

I am in favor of animal rights as well as human rights. That is the way of the whole human being. 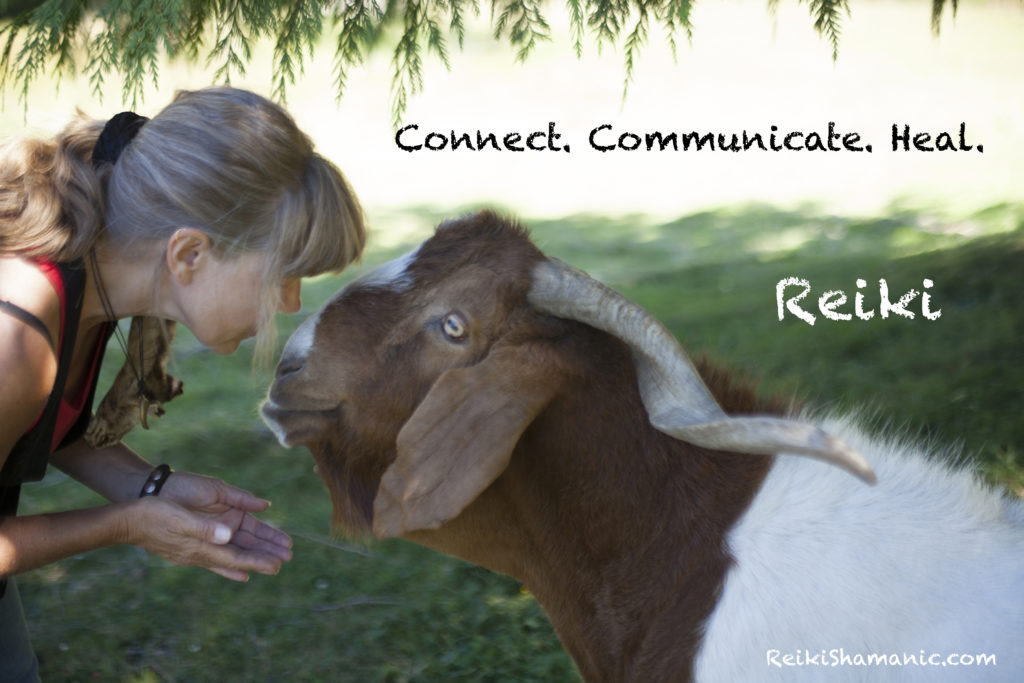 Want to become an animal magnet?