Originally published under Lori Hinton’s ongoing column “101 Things to Do in West Seattle,” this article was included in the book West Seattle 101.

Walk up the stairs and you’ll know almost instantly that you are in for wild experience. First you’ll be greeted by four cats and a curious dog named Puma. Then, depending on whether you arrive solo or with your pet, you’ll hop on the table or the couch for your session.

An alternative healer for pets and people, De Dan practices Reiki, Shamanic Healing and Acutonics® to treat everything from animal arthritis to stress.

So what are all these types of healing and do they really work?

Reiki, in simple terms, is a noninvasive form of energy healing facilitated by the practitioner to assist the client in creating balance—emotionally, physically, mentally and spiritually.

“Similar to the way our blood circulates, we also have pathways of energy circulation,” describes De Dan. “We’re more than just physical bodies, we have energy bodies and spirit bodies as well.”

The Chinese call this energy our vital force or “qi” and the Japanese call it “ki.” Hence the name “Rei-ki” which means the sacred, vital force.

Shamanic Healing, on the other hand, is just like it sounds—traditional healing by an indigenous shaman. Considered an urban shaman, De Dan was trained by the Q’ero people’s own “pacos” (or shamans) from Peru.

“It’s an animistic belief system meaning that all things have spirit,” she explains. “We use a mesa (a bundle of healing stones) to track energy blockages and reestablish energy flow.”

As for Acutonics®, a practice developed by acupuncturists, music theory is combined with the knowledge of acupuncture to stimulate energy points via specially calibrated tuning forks.

“It reconnects you to the universe,” she calmly smiles. “It’s all about reconnection.”

Though some question this type of healing, De Dan says she has evidence that it really works.

“The proof is in the animal healing,” she explains. “Because there is no placebo effect with animals like there can be with humans, you know it works. A geriatric dog can come in here barely able to walk up the stairs, but after a session or two will show increased mobility. You can see the results.”

Common animal issues she helps treat include injuries, eating disorders, stress and dealing with the end stages of life (for both pets and owners).

“We had one puppy client we helped de-stress after a long plane ride that subsequently suffered a spinal cord injury,” recalls De Dan. “We helped restore her ability to walk.”

More than 70 percent of De Dan’s business is animal related, and some say she has had a special connection with them from the beginning.

Raised in South Jersey, De Dan grew up in a house full of animals with a mother who rescued injured or abandoned critters.

“We were the only people in suburbia with diving ducks in the bathtub and a South American chicken on the patio,” she reflects. “But I also had a deep connectionwith animals early on, whether it was in our household or someone else’s. They always seemed to gravitate toward me.”

De Dan was a graphic designer in Massachusetts for 22 years when she got involved in the strange and wonderful world of energy healing. At the time she felt there was something missing from her life, but she didn’t know what. An article compelled her to take a Reiki class, which she attended with an open mind. She says a “surge of energy traveled through [me] and opened some kind of inner door” that had been closed—and suddenly she knew what she had to do.

“It was like the universe tapped me on the shoulder and said, ‘Hey, this is what you’re supposed to do, you need to be a healer,’” she beams. “It was like Christmas—getting some huge surprise present that I didn’t know I really wanted.”

Reiki was her doorway to all other forms of healing and she’s been training and practicing ever since.

So if you or your pet (or both of you) want to give alternative treatments a try, get ready to let your energy flow and step into De Dan’s office to experience the wilder side of healing.

When: Call for appointments Price: Prices vary with treatments and classes

Those who contemplate the beauty of the Earth find reserves of strength that will endure as long as life lasts…there is something infinitely healing in the repeated refrains of nature—the assurance that dawn comes after night, and Spring after winter. 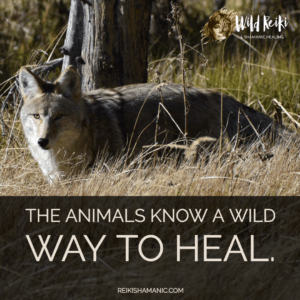